To Pay or Not to Pay? The Homeowners Association (HOA) Dilemma

As with anything else in bankruptcy, how to handle homeowner association (HOA) dues depends on what you want to do with your home mortgage obligation and where you are in the process.

I forgot a creditor, what now?

If you forget to list a creditor in your bankruptcy case there are several ways to address the problem and still maintain your discharge as to that creditor.

What is Bankruptcy Fraud?

Bankruptcy fraud can take many forms beyond lying on your bankruptcy paperwork or not telling the truth at the 341 Meeting of Creditors.

How Often Can I File for Bankruptcy?

What is a vehicle cram down in a Chapter 13 Bankruptcy?

The cram down of a vehicle loan and the reduction of the loan interest in a Chapter 13 Bankruptcy is a fairly straight forward process and can generate significant savings in your Chapter 13 case.

What is a subordinate mortgage lien strip?

The lien strip characteristic of the Chapter 13 Bankruptcy is a powerful tool to reorganize your debts and remove subordinate liens on your home after bankruptcy is done, if you complete your plan and other conditions are right.

How are my rent to own goods treated in my Chapter 13 Bankruptcy?

In a Chapter 13, the treatment of a rent-to-own agreement will be governed by state law and the economic reality of fighting over that determination.

How do I discharge my Income Tax Debt in Bankruptcy? Part 4 of 4

As a general rule, you are not required to file an adversary proceeding to discharge tax debt, but such a proceeding does provide some level of certainty that the tax debt is dischargeable.

How do I discharge my Income Tax Debt in Bankruptcy? Part 3 of 4

Personally assessed taxes like the trust fund recovery penalty can not be discharged in bankruptcy.

How do I discharge my Income Tax Debt in Bankruptcy? Part 2 of 4

A tax lien, like any other kind of pre-petition lien, will survive bankruptcy regardless of whether the actual claim is discharged in the bankruptcy proceeding.

How do I discharge my Income Tax Debt in Bankruptcy? Part 1 of 4

While the discharge of income tax debt is fairly simple in bankruptcy, there are several factors that you must satisfy to accomplish that discharge.

Can I Discharge Student Loan Debt? Part 4 of 4 What are Good Faith Efforts to Repay the Loans?

Under the good faith payment prong of the student loan discharge test you must show good faith efforts to repay your loans, maximize your income, and minimize your expenses.

Can I Discharge Student Loan Debt? Part 3 of 4 What are Exceptional Circumstances?

The exceptional circumstances prong of the student loan discharge test is interested in what factors will exist for the foreseeable future that make it impossible for you to repay your student loan debt.

Under prong one of the student loan discharge test, you do not need to live in abject poverty to show that you cannot maintain a minimum standard of living if you are required to repay your student loan debt.

Can I Discharge Student Loan Debt? Part 1 of 4

While it is possible to discharge student loan debt in a bankruptcy, it is very difficult and very expensive.

I Know my House and Car are Secured, but What Else?

Will Bankruptcy Save My House?

A Chapter 13 can save your home by paying off the mortgage arrearage over time and making your monthly mortgage payment under the protection of the automatic stay.

What Will Bankruptcy do to My Credit Score?

While there are some general rules about how bankruptcy will impact your credit score, the actual impact will depend on your circumstances and your conduct after bankruptcy.

What Will Filing Bankruptcy Cost?

How much a bankruptcy will cost varies depending on the services you are looking for and the result you hope to achieve. There are costs that vary from case to case and costs that are the same. The cost that will vary the most is the fee the attorney charges for his or her services. The cost is generally based on the amount of work needed to accomplish your goals.

How to Interview Your Bankruptcy Attorney 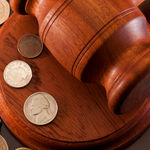 Do I Need An Attorney to File Bankruptcy?

Why Listen to Terry

This site is designed to assist Southern Maryland consumers with the very hard decision of moving forward with a Chapter 7 or Chapter 13 bankruptcy.  As with anything else in life, the first question that should come to your mind as you read this post, or any other for that matter, is why should ...

The financial stress you are feeling will not get better with time. Take control of your finances again and call Skeen & Kauffman today to speak with an experienced bankruptcy attorney and to schedule your free initial consultation.